St. Clement's ChurchThe Parish Church, as it has become since the union of the three original Sandwich parishes (St Clement's, St Peter's and St Mary's) in 1948, stands in the south-east sector of town, adjoining the ramparts. It was formerly the election place of the Mayors of Sandwich and there are many carved headstones in its ancient and extensive churchyard.

The central tower and east and west part of the nave belong to a 12th century aisle-less church; in the 13th century, the chancel was rebuilt with a north chapel and, in the 14th century, a south chapel was added.

Originally, the church was cruciform in plan, as was characteristic of Norman buildings, but the addition of chantries and chapels produced the present shape and dimensions. 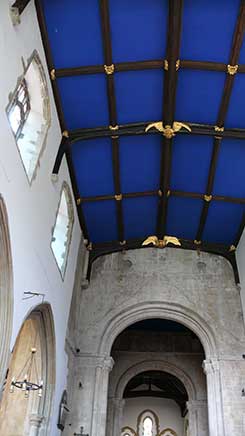 The Norman tower is one of the finest in England and the pillars that support it have rounded arches and curiously carved capitals with various ornaments of scrolls, frets, foliage and grotesque figures.

In the north-west angle of these columns is the doorway to the spiral staircase over which is an interesting tympanium with late Saxon or early Norman carvings.

The octagonal heraldic font has on one of its faces the arms of ancient Sandwich, and on the south face, the arms of Archdeacon Robert Hallum, by whom it is believed the font was given in about 1406.

Over the north door is the "Priest's Room", and other interesting features are the oak stalls of the members of the Confraternity of St Clement, one of which is a miserere seat; and many indents of brasses, one of which was the Bishop of Ross, Vicar of the parish in 1444.

St Margaret's Chapel has a complete medieval tiled floor; also a Gradas (gospel-step) built into the altar dais; two altar stones are now restored to their proper use after having been used as tombstones.

The Chapel of St George contains a statue of St John that was taken from Lincoln Cathedral by the Puritans. The Mayor's seat, which faces this Chapel, bears the date 1869.

The church is open and stewarded:
from May 1st to September 30th, from 10am to 4pm.
This is not guaranteed but access can be gained at any time by contacting.
The amount of notice required may vary.
Please Contact Churchwarden:
Mr. Barry Brooks